We have sailed to many places. This time, we have explored the South of England and the waters between the mainland and the Isle of Wight. The main water being The Solent, with many little rivers and tributaries leading into this from the land.

One such sleepy little river is the Beaulieu river. 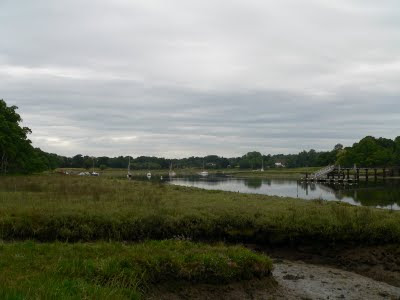 It meanders through the landscape and as it is a tidal river, at low tide you can see the mudbanks near the shore (see above). At high tide these are completely covered, sometimes higher than the grass you see here. It is a paradise for birds and many waders and other birds find a fantastic habitat here. 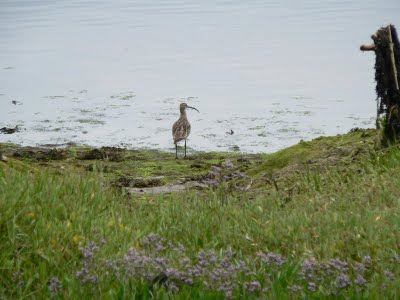 On one bend in the river, there is a little shipbuilding village called Buckler's Hard. The origin of the name is not clear. It is thought that because there was a stone beach at low tide, the place could be used as a landing place (a hard) and that the local Bucklers family frequently used it.

At the beginning of the 18th century, the land was owned by John,2nd Duke of Montagu. He was intending to build a town here (Montague Town) to build a free port for the import and export of sugar from the West Indies. He only got as far as two rows of houses and eventually the village became a shipbuilding village. 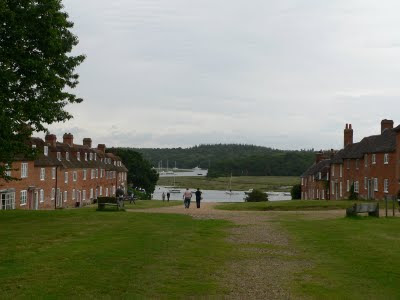 Many big ships were built here, among which the Agamemnon, one of Nelsons favourite ships, launched on 10th April 1781. Another the Euralyus, seen here in a painting in the museum of Buckler's Hard. 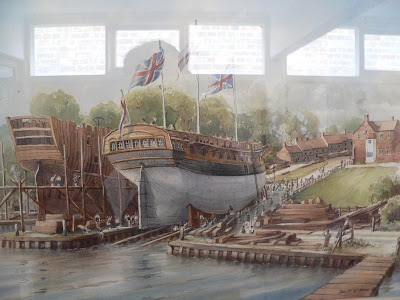 When finished, these enormous ships would be launched and pulled by several boats, manned with rowers, to the open waters. It is mindboggeling to think how ships of this size could be handled on a river so small. I would imagine they waited for very high tide!

The remnants of the wood for the docks and launching slipways can still be seen at low tide although of course heavily affected by being under water most of the time. 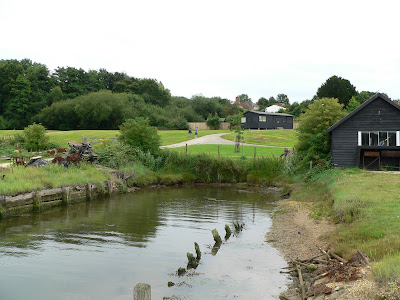 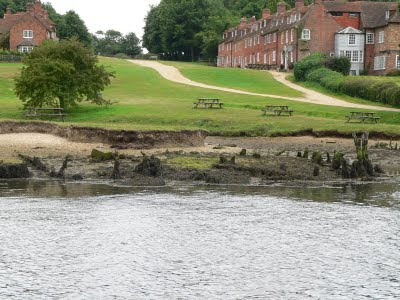 The working shipyard at the marina is still called the Agamemnon Boatyard. 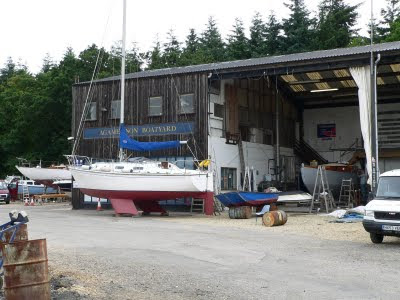 Some of the houses are part of the museum and have been furnished as they would have been at that time (and some have been rented out and are actually used as houses although to our standards now very very small). There is the masterbuilders house, the biggest of them all with the best view of the river (being closest and on the corner) which is now a pub which serves delicious food in authentic surroundings. Also reconstructed is a shipswright cottage, which was more luxorious than the labourers cottage, a shipswright being a skilled professional. The shipswright enjoyed real beds. The labourer had a sort of mattress on the floor. It did however have a quilt on it and as my son said... "oh no, mum has seen a quilt, hide the camera..." 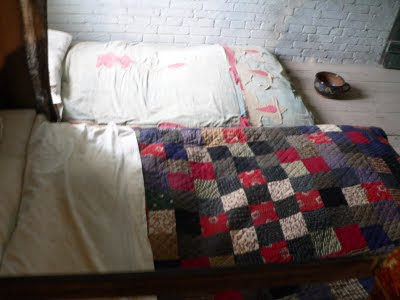 Originally one of the houses was also a school house. When the children started going to the nearby school in Beaulieu village, the old schoolhouse (which was occassionally used as a chapel) was turned into a Chapel proper and named St. Mary's. You can recognise the chapel by the bell over the door. (double click on the photo for a better view) 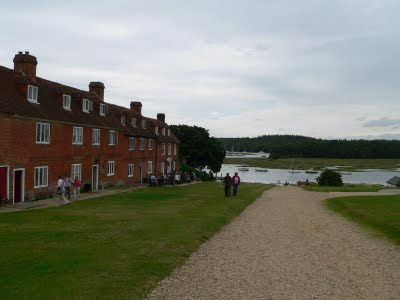 View from the Chapel 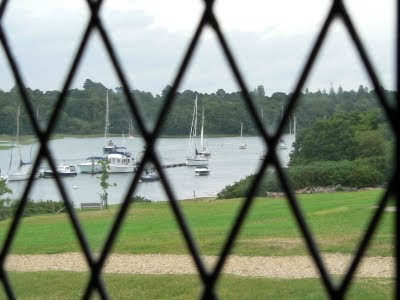 Inside the Chapel is a beautiful altar cloth with images significant to the naval history of Buckler's Hard and others of family importance to the Montague family. The names of some of the ships built here adorn the cloth top and bottom. 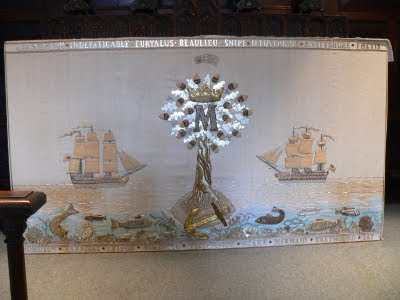 The museum and guidebook (to which I reference dates and facts with thanks) are very interesting. The museum even houses Nelson's baby clothes! Including a very cute white little cap!

It is a really interesting, picuturesque, historic place which is well worth a visit if you are ever that way. I thoroughly recommend it!

WoW!! What a great little place! It is very interesting...thanks for the pictures and sharing your wonderful adventure!! :)

It sounds a bit like heaven on earth. Thank you for sharing your vacation with us. Makes me feel like I've had a bit of a holiday too!