I am so excited! My secret santa has finally arrived!! In the end it was returned to sender (Greta, codename Gretters) twice, the mailman obviously did not like the parcel.... the second time with the loss of a FQ too as it was ripped....
Such bad luck! Which turned into my extremely good luck, as I think I am the last one to receive my secret santa but certainly not least!!
Greta was really upset to keep me waiting, which was worsened by my seeming impatience on the threads... Poor Greta... I was just having some fun guessing on the thread after Flossie got hers... I really, really did not blame my santa for the mail's problems!! Honest!!!
To make up for all the problems she put 'something extra' in the parcel (as she described it) and just LOOK at what I received ; 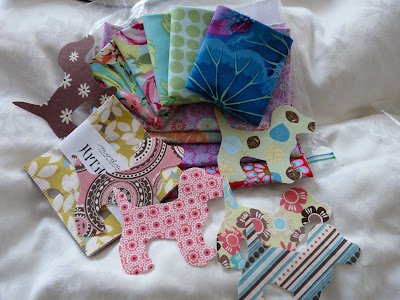 It starts with the original four FQ from Kaffe Fassets collection (it's well known I love Kaffe!) Greta originally published on the thread.. They are almost invisible in the photo as I had to pile on top to get it all in the photo!
Then a lovely arcadia charmpack ( I heart arcadia Greta, bulls eye!) and those absolutely ADORABLE dogs! here are six of them and I am planning to make a doggie quilt with the dogs in the center of squares and make some more myself. They are SO cute! They have some paper on the back and it says they are allready fused... Have to find out what that means... does that mean you peel the paper off and then can iron them on? Anyone?
To top that all another colourful FQ that looks like Kaffe (is it in the blue?) and 4 fantastic coordinating FQ's from Amy Butler's new LOVE range.
I must say I am speechless.... Thanks SO much Greta!!!
I think I can sum up this Secret Santa in that it probably has taken the longest time to arrive, also has travelled the furthest (over the ocean AND two round trips and a single...), was most moaned about in the threads (didn't mean to upset you gretters...it was just fun...) and most definitely the best parcel of the entire bunch!!
You really got all my tastes there... Kaffe, Amy, Arcadia and Dogs!!! You are very clever and very generous and I so enjoyed getting the parcel! It really cheered up my day now I am still home recovering and maybe that was the plan all along (unbeknown to us..)
Certainly worth waiting for! Lucky me!
Thanks Gretters, you are tops!
Posted by Rafael's Mum at 12:00

Lovely package!! Yes, that is definitely Kaffe on the top! I carry it in my online shop. Another yes for the paper backed dogs. Just peel off the paper and iron the dogs down to any other fabric and Voila! you have fused dogs!!

Thanks Jackie, wasn't sure about the fusing being a relative beginner still. Glad I do recognise a Kaffe when I see it :-)

Thanks for answering all my questions!

WhoooooHoooo....nothing better than getting a package in the mail!:)

I'm sure this is getting your creative juices flowing which in turn is making your body heal even faster!;) But don't overdo it!!!!:::)))
xo

Awesome package Marg! Those dogs are so sweet!! And all those FQs!! And a charm pack! You lucky girl. Definitely worth the wait!!

Fabulous package, I love those dogs! What a well travelled package, if only it could talk! xo

Well that package was worth the wait I'm sure. You've recieved some beautiful fabrics Marguerite that are sure too inspire you.

These fabrics are just perfect - lucky you

Those fabrics look gorgeous - bet you can't wait to start cutting them up and sewing them back together again!!
So pleased to see you posting again and clearly back to your old self! x

My your postman has been BUSY!!! LOVE the little dogs...how CUTE!!! After you iron on the dogs it is best to go ahead and stitch them also to be sure they are good and permanant!! I am soooo glad you are doing better..your spirits sound UP UP!! YAY!! xo