Before I post about goodie bags, fabric bought and plans, I want to take a moment to say an enormous, gigantic, huge THANK YOU !!!! To Leila (Where the Orchids Grow) and Leanne (shecanquilt).

As some of you know, I was so bogged down with work, I nearly didn't make it. Many friends said to me 'as long as you are there in person, forget the rest'... but having committed to the swap, and not having made my own badge yet (luckily had the sense not to enter in a swap there :-), I did not want to let anyone down.....

Into the breach stepped Leila... she wouldn't hear of not making my swap items, in spite of not entering herself due to lack of time! She made four absolutely beautiful lavender pouches with lace and lots of tiny piecing. They were just beautiful!! Thank you Leila, for taking the time to help out a friend, I really really appreciate it! This is the one that ended up with Karen (photo by Karen, thank you for allowing me to use it Karen!). Isn't it great ? 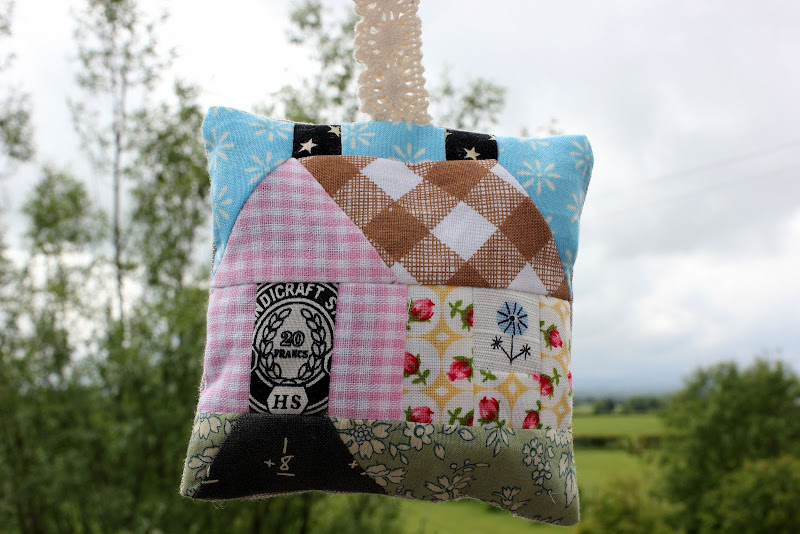 As Leila gave them to me just before a class and the swap (to which I was late) was just after the class, I unfortunately can't show you the other three, I really wish I had had the time to take a picture but I felt guilty being late already... Still, you can believe me if I say they were just as lovely. Thanks for saving the day Leila!

Another lady who I did not even know before but since become a friend is Leanne from Canada. She made the journey over here and did some London sightseeing before the retreat. As I said, we only met online because we were both in the Iron Man Challenge and within the shortest time, learning of my predicament, she also insisted on making me a badge.. inbetween the sight seeing and (being in London only a short time) obviously having better things to do!

So I ended up proudly wearing a little piece of "Red", her beautiful quilt she made. 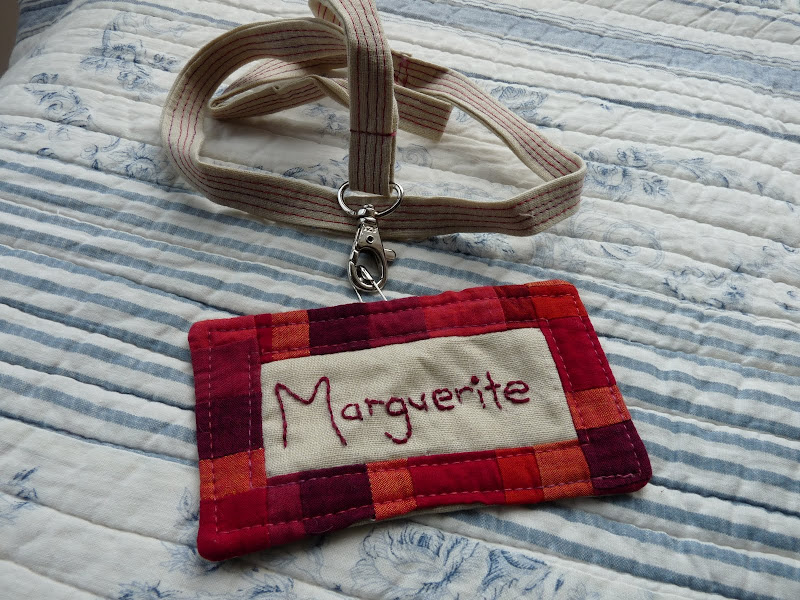 It shows time and time again how strong online friendships can be and also what a generous bunch quilters are. So I made it to London! and thanks to both of you, I did not end up with a sticky label (well I did that too :-) we all were wearing both to start with) and my swap partners were not disappointed! I owe you guys! Thanks awfully much !!
Posted by Rafael's Mum at 12:21

Bloggy friends are the best! I'm sure Leanne and Leila enjoyed being able to help you out Marg! Your tag is very special!

You are more than welcome Marg! You owe me absolutely nothing I am more than happy with my beautiful pouch x