Totally encouraged by the kind comments from Jo and Lizzie, I have fixed the bit that was wrong (inbetween other things...) and taken a photo of the square as should be!

I even found time to blog about it now, rather than monday.. How is that for good intentions!! (Being up since 5.30am did help a little there too! It's amazing what you can get done with a little extra time!!)

Ok... the workshop. We were making the basis for a convergence quilt, led by a lady who had the book by Ricky Timms of the same name. This is my table with everything still nice, clean, organised and set out! 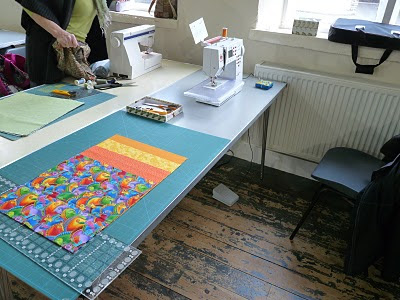 First up we were required to bring 4 square's of either 14" or 16"sq. I thought I'd go for the smaller one and see how thing pan out! 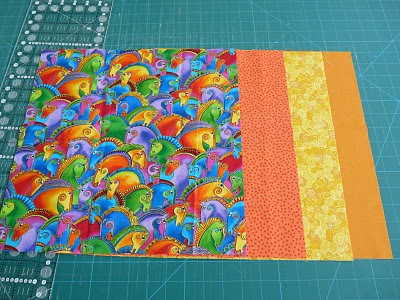 We proceeded to lay them out in a bigger square (no photo of this) where I had the horses left bottom, orange spots left top, yellow right top and orange right bottom. Then fold over the bottom squares onto the top (right sides touching) and sew along the bottom line. 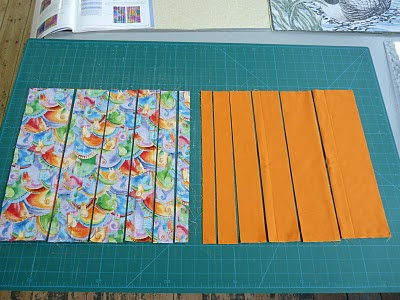 You then move the smallest strip of the horse panel, all the way to the right into the gap between the two biggest orange panel. Once you have intermingled them all (converged them!), you open up to full length. 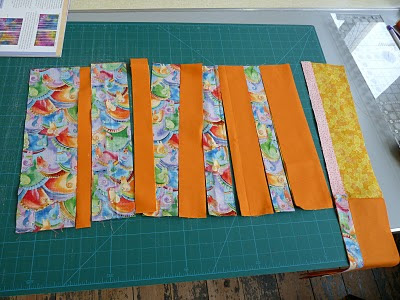 and first sew two strips at a time together, 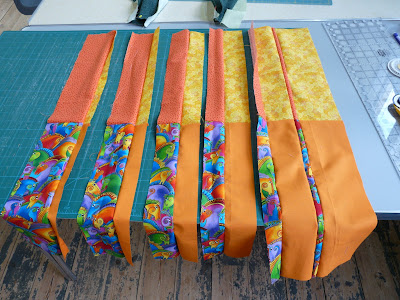 then, once you have done the row, start again sewing together till they are all connected. 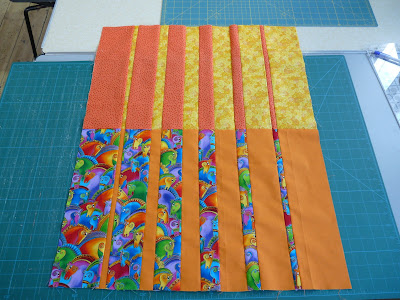 Following this, you turn everyting 90 degrees so you now have the horses/orange bit on the left and the spot/yellow one on the right. Square both panels up aligning onto the long lines by cutting out the middle bit (yeah.. that's right, the bit where I so carefully tried to connect up all four corners! ha!).

And do the same againg... cutting strips from the middle to either of the sides (same sizes strips again), 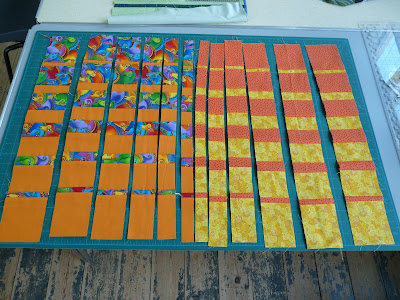 converge, also as before; 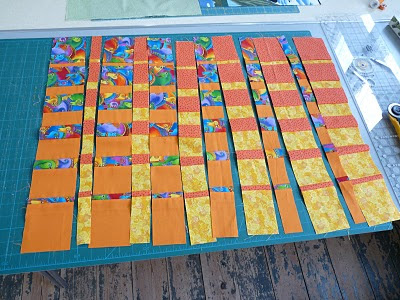 and repeat the sewing the two strips together again; 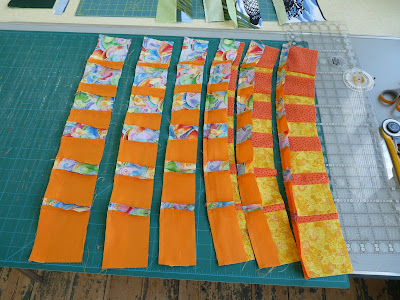 then, also like before, join all those till everything is joined; 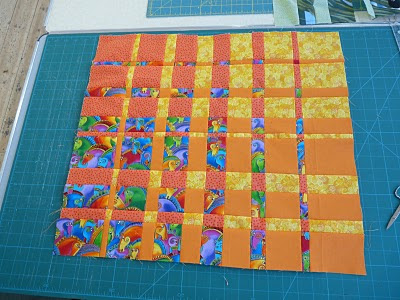 It is then (and only then...) that you realize the interested person who came to look at your fabrics and picked up a strip... has put it down in the wrong place! In the middle, instead of at the end... Being so busy sewing and matching points (a lot, a lot of points!!) I did not notice....

Luckily I have my trusty seam ripper and ripped and re-sewed and then it looks more like it should do! 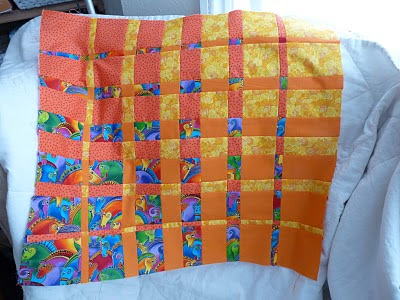 One more tip I have to give on this and that is that it needs ironing in a very particular way. I was told it did not matter which way the seams went and to iron it all in the end. Someone else then said, she had read the book and if you do not iron half way through (half one way, the other the other way) you never get your seams to but up properly and consequently cannot match your junctions. I was very frustrated as no matter how well I matched.. because all the seams were ironed the wrong way, I could never get them to lie flat.. they sprang back and got sewn slightly out...

But you don't see that from a distance right?.... right??? I am glad I did the workshop thought as that was such a good thing learned.. It was of course very stupid of me as Dana had allready taught us the importance of ironing right at the start of the ORBC group... I KNEW it, that's why I asked, but, not trusting myself I relied on what I was told and came acropper.

All that needs to be done now is a border, maybe some applique on top and quilt and bind. I have a feeling thought this is going to be another UFO... (rather than a WIP...) as I did make time to go the the workshop but don't have time to finish it at home!

Looking back this almost looks like a tutorial... It isn't and to do it properly I would recommend to beg, steal or borrow Ricky's actual book as it is wonderfully well explained in there with lots of variations (wavy lines etc... wow....). I didn't mean to do a tutorial or I would have photographed each stage much more extensively. I just wanted you all to have a rough guide so you have an idea what it entails and whether this is something you would like to do!

I had fun at the workshop, but I somehow doubt I'll make another one... maybe when I have bags of time! Talking about time... must leave you now! Have fun if you are going to try this!
Posted by Rafael's Mum at 15:33

I love it! It looks just like a sunset! Very pretty!

It is really pretty! I bet never being able to match all these points so nicely.

It looks wonderful Marg and you did a great job explaining...I may even try it one day!:)

I understand about not doing it again but that's ok because there are soooooo many quilt patterns and ways to do things that sometimes you just don't have time to do the same thing again!;)

Super job on that - looks really difficult - and finishes out so nicely. Not your favorite pattern huh? Be proud that you tried it - accomplished it - and take what you learned and move on to things you really enjoy. I love those convergence quilts though, they really are sharp.

Well done to you, looks really good. Its nice learning something new, but also to realise that certain things are just not your favourites. Makes the things you do love seem so much better.

I (re-)discovered your blog and wanted to say hello from another quilter who sails, only in Kentucky USA. Glad to "meet" you here in blog-land.

Thanks for the unintentional tutorial! You explained everything well. Not something I will probably have time to try but quite intrigueing to see the final quilt top emerge. And no you can't see any mismatched seams in your photos!

OMG, Marg! I think it looks perfect and that that is the coolest thing I've seen in a really long time! I love it and I want to try it, maybe on a smaller scale to start, though.

AMAZING. And phooey on the interested person who goofed you up. She should have known better if she was in the class, too! Hmmmph.

Yep, I think it's time that you start trusting in what you know that you know! You're good, girl! And it shows.

I've admired this piecing technique and have tried to get the book from public library (now listed as lost). So nice to have photos and an un-tutorial - thanks! I can see how unpressed seams would create a lumpy problem but your piece has turned out great, I believe.

Thanks for you non tutorial. I had been planning for a while to attempt this pattern and your blog broke it down beautifully for me. I got busy on Sunday during the day and armed with 4 squares of batiks away I went. Thank you for sharing. I do have a picture of my " top" on my blog.

Hi,
I really want to thank you for publishing this! I was looking for a new project, and within 10 minutes of finding your blog, I was out the door buying fabrics! You described the process so well, that I think I did a reasonable job (will have to do better on the ironing next time), and I'm now on my second quilt. Also - my mum in law brought my the first quilt I made to her quilting group, everyone got excited, and they did a convergence quilting workshop 2 weeks later.
You caused quite a ripple in the quilting universe, lol!
Thanks again!!
Astrid from Melbourne

Hi Astrid, glad you found it useful and so many people had fun! I tried to find your email but you are a 'no-reply' blogger so I cannot reach you. My email is on my profile. Thanks for letting me know you enjoyed my post! Good luck with your second quilt.

SUPER! I googled convergence quilts for some ideas/visuals and was struck by these colors. Even better is that I have the same fabric in the other, more earthy colortones, and it'll be PERFECT for my first convergence project. Thanks for sharing!!

Thanks a lot for this very clear tutorial. I'll try to do it.
Christiane from France

Thank you so much for explaining it!!!! I'm from Argentina and as we are not allowed to buy books outside, we can only read ebooks but Convergence quilts is only in paperback!!! So, thanks to you now I'm able to make it.
Thanks again!!!!!

Hi Twety, glad you liked the post. I cannot reply to you as you are a 'no-reply' blogger. If you want to mail me, my email is in my profile.

I have always been curious about how this is done. Thank you for filling in the blanks for me.

I LOVE this...thanks for the thorough writeup. I had to read it several times to "get it" LOL, and I am so happy as I have so many beautiful pieces that I had no idea what to do with, that will fall right into this method...and they will look beautiful :) ML

I love the way your convergence quilt came out - beautiful colors. If you start with 14 inch squares, what is the final quilt top size?

?I was very happy to find this web-site.I wanted to thanks in your time for this excellent read!! I undoubtedly enjoying each little bit of it and I've you bookmarked to take a look at new stuff you blog post. betfair online casino

You did a wonderful tutorial (even if it was not meant to be one). Makes me want to try to make one. My question is what did you mean by cut 1.2"? Did you mean 1.5" or was that to be metric?

You may not have intended to do a tutorial, but I will tell you...I watched a couple of other "tutorials" and didn't "get it" until I read yours! Thanks a lot. I'm thinking...maybe not. I surely don't need to add to the UFO pile! But I enjoyed watching the process.

Has anyone made convergence place mats? Any hints as to what size fabric to start with??