from Ramsgate to all my friends and readers. 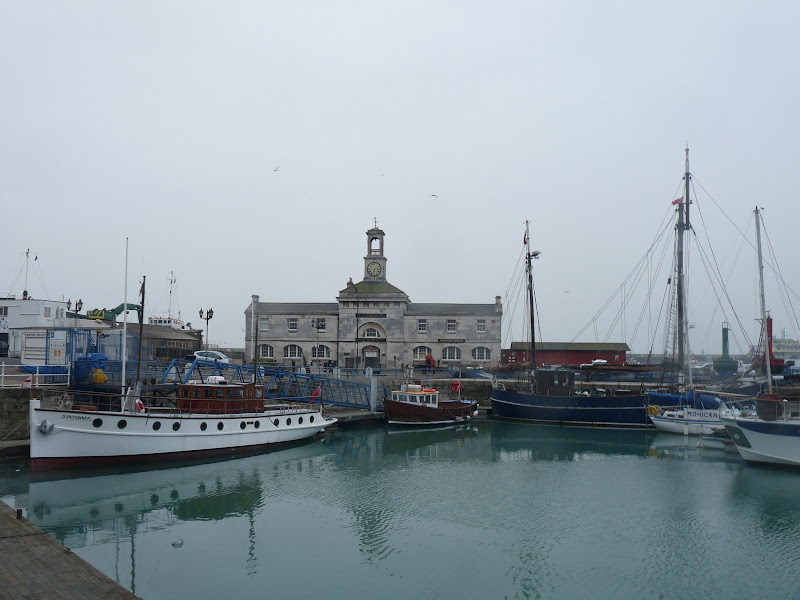 ramsgate harbour in the (not rising from the fog yet) early morning sunrise.. 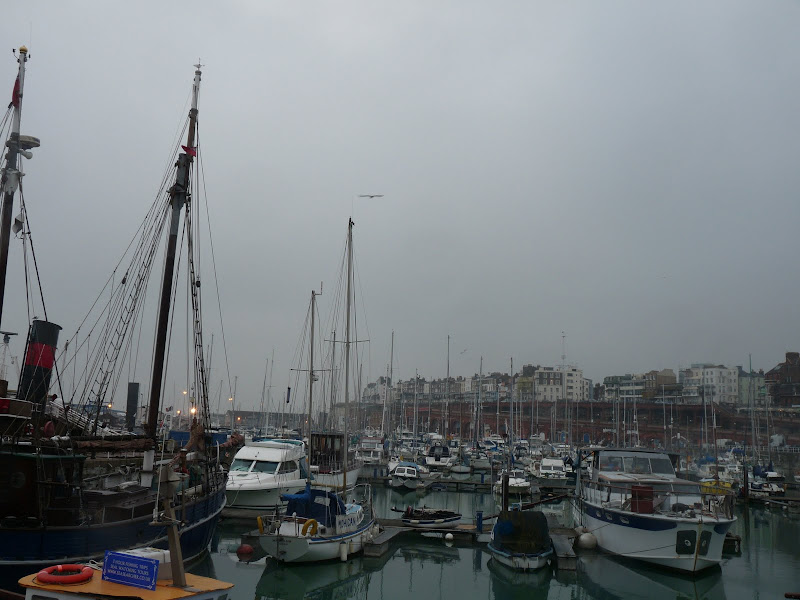 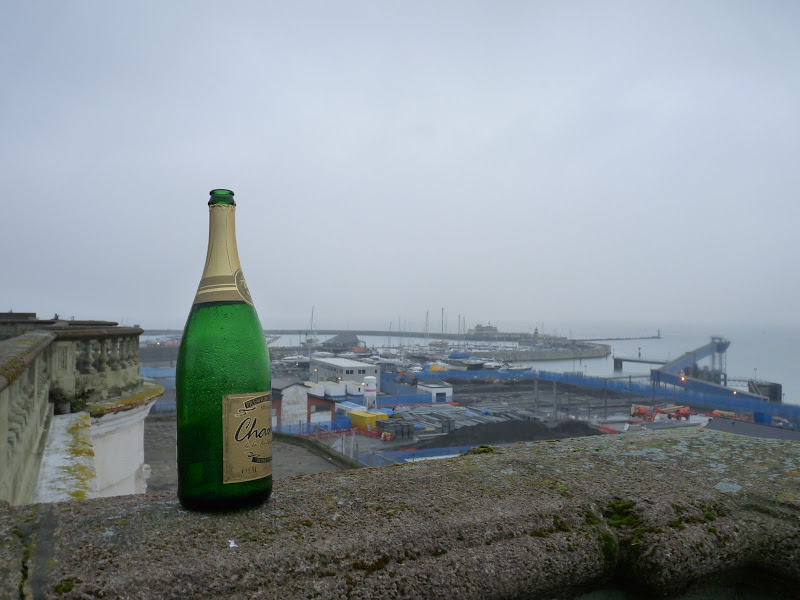 our New Year's walk took us through the village of Pegwell 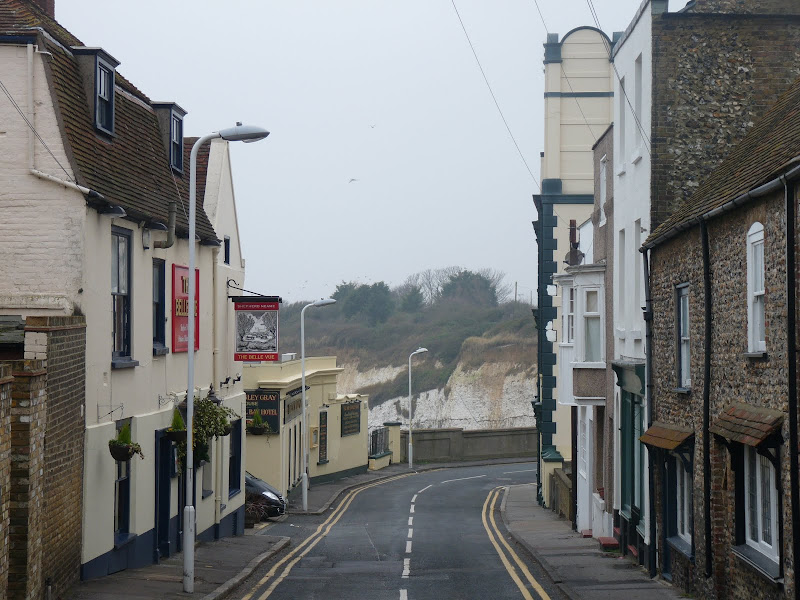 into the countryside. (I thought of Micki but did not carry a carrot for the horses.. which was just as well as soon I saw a big sign saying 'don't feed the horses'!) 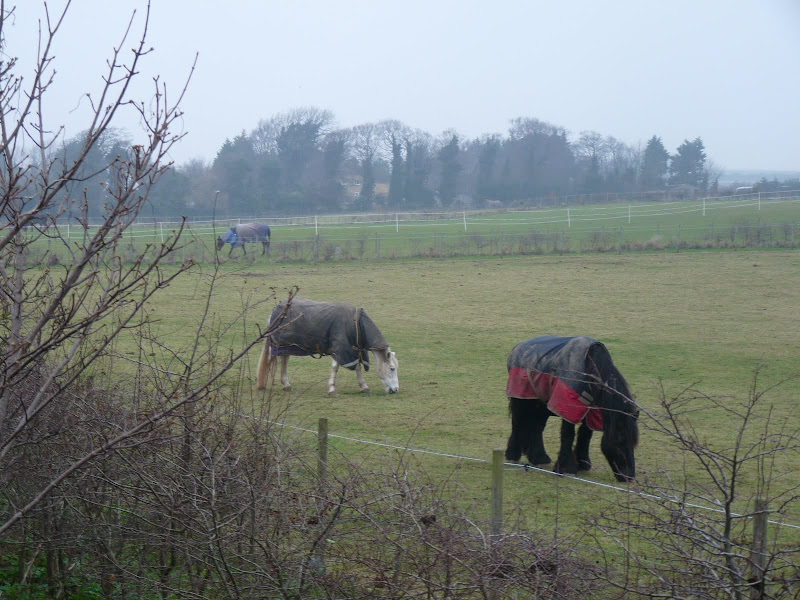 Pegwell Bay nature reserve is lying on the edge of a disused hovercraft site but has a beautiful beach lying at the bottom of the cliffs which are towering over it.. 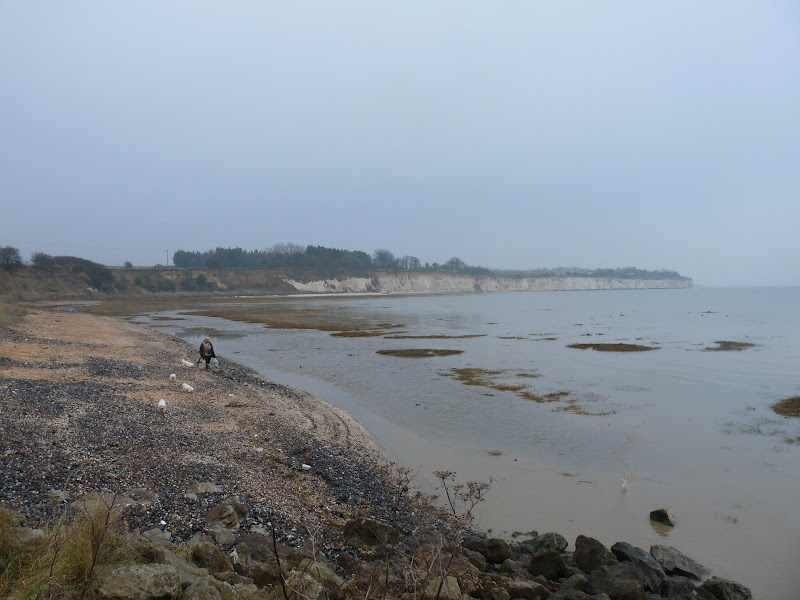 It is good this stretch is a nature reserve and protected, as in the marshy waters of the bay, many migrating birds have a rest before continuing on their journey. Here a few oystercatchers standing inbetween the seagulls. 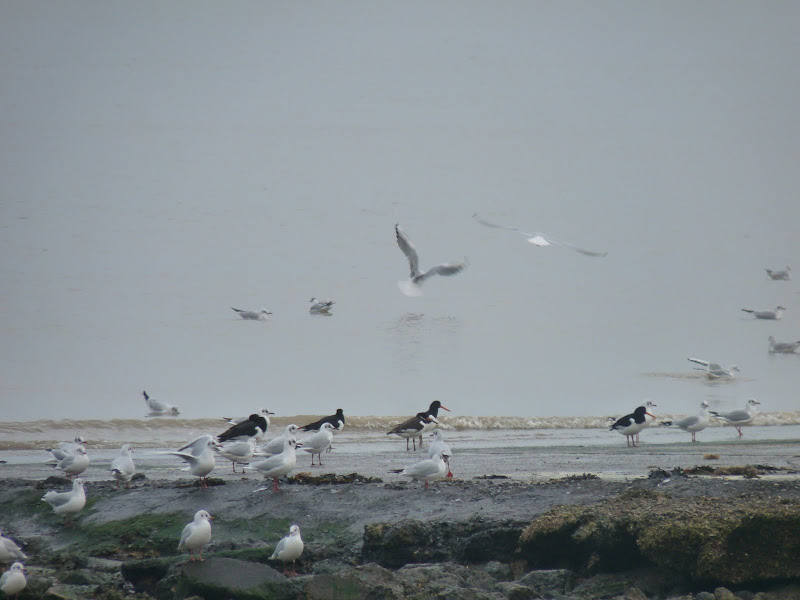 Whenever a manmade structure gets abandonned, nature takes over again. Through the cracks in the concrete of the abandonned hover port, lilac bushes and grasses grow in abundance, making for a surprising landscape.. 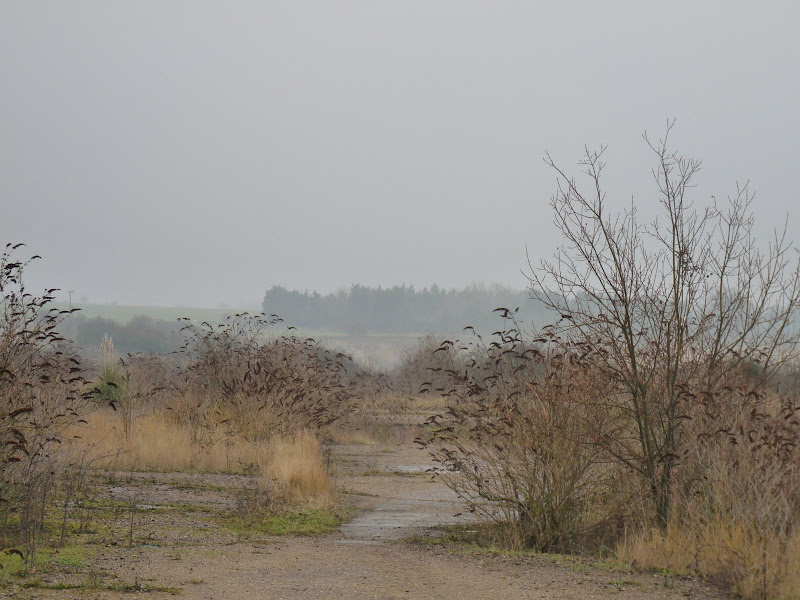 Can you imagine cars waiting to board here in the heyday of the hovercraft? 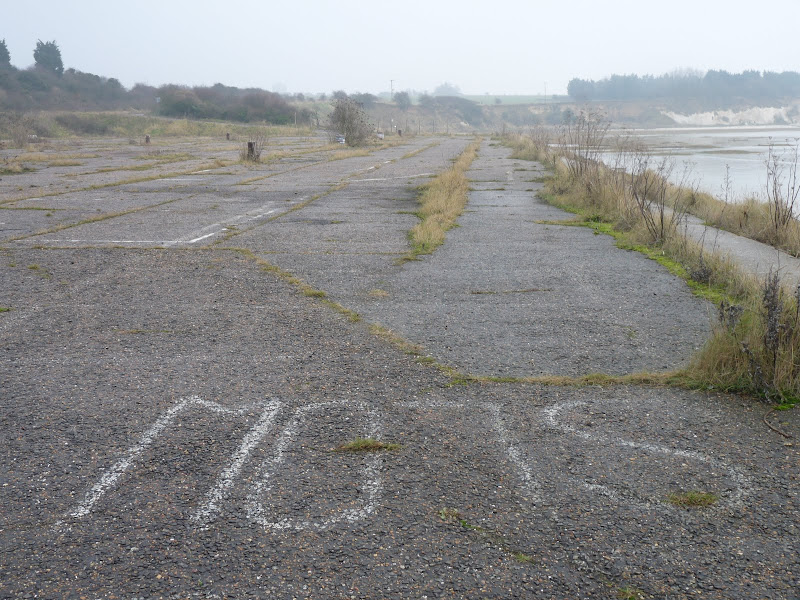 A bird with Very orange legs risked coming quite close.. (I have to look up what it is.. not sure at the moment..)edited: It's a redshank, thanks Julie! 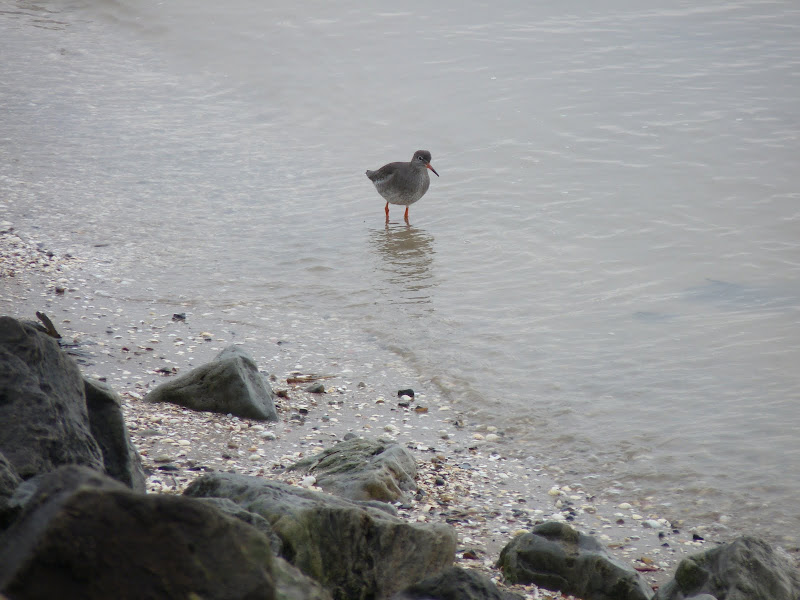 And flocks of smaller birds also flitted about. Settling on the mud en masse...
(a sort of sanderling maybe?) 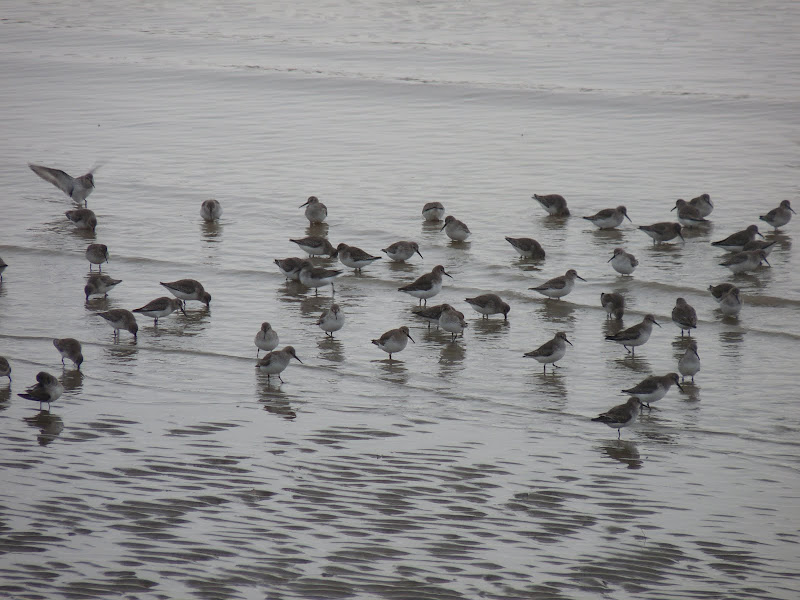 only to fly off just a second later.. 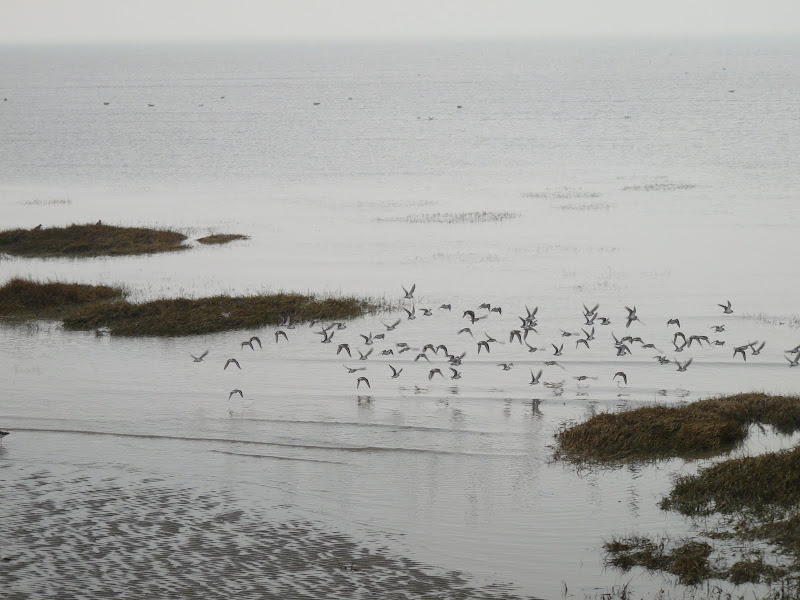 The sun seemed to symbolize the start of this year... It's trying to break through to make it a sunny one... but still a bit of a struggle... 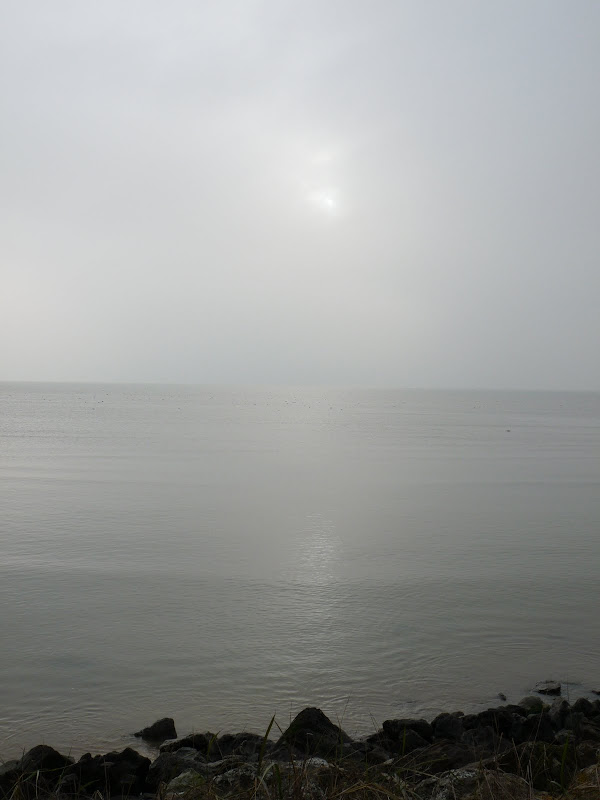 I hope that for those of you who had a brilliant 2010, the coming year will be even better. For those for whom it was a thoroughly terrible year (and sadly, there are quite a few too...) I hope that the sun may shine through the fog and come out bright and strong and make 2011 a year to remember for all the good things that happened!

I will leave you with another beach shot. May 2011 be the best year ever !! 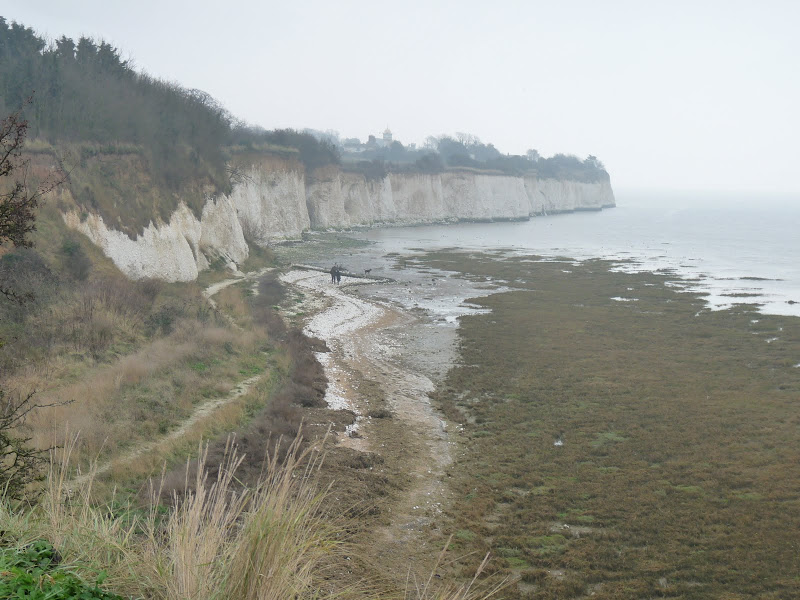 Oh, what a beautiful place you live in! Thank you again for the incredible photography -- and wishing you the best in this new year.

What a lovely walk you had this morning tho' it looks very cold. I think the orange legged bird could be a redshank.
Here's to a wonderful 2011 for us all. Take care, Juliex

I really enjoy seeing your gorgeous pictures of a landscape that is nowhere like my own. Happy New Year to you as well.

Happy New Year!! I'm constantly amazed by the beauty in your surroundings. Hope you and your family have a happy and healthy and productive 2011!

Thanks Marg, your photos are fabulous as always. I feel I know Ramsgate so well! Maybe 2011 will be the year I get to visit! I hope you will have a great 2011 too!

What a gorgeous place! Funny, how the horses made you think of me. Well, we are always feeding Bobbi horses, and I am always posting about it. Maybe that is it.LOL Anyways, I did enjoy al of the pics....absolutely beautiful place!
Micki

Happy New Year - I believe you that you 'found' that champers bottle - it didn't cross my mind that you thought it would make a good picture after your last breakfast-time swig!! Hic x

Great photos Marg- we have missed them!! Can't pick a favorite, they are all stunning! A happy new year and may 2011 be a good one for you and those you love!

Looks like you had a great New Years Day, what a lovely walk - Happy New Year to you all

Thanks for the lovely photos from your walk! Always so interesting to see other peoples surroundings. Here's to a better 2011 that's for sure! It's only just occured to me that's its a new decade too. Dah!

Loved the walk around Ramsgate, took me back a few years, though I don't think we would have found Champagne more like a bottle of beer....life has moved on. Yes, lets hope 2011 will bring health wealth and happiness to all. Thanks again Jo