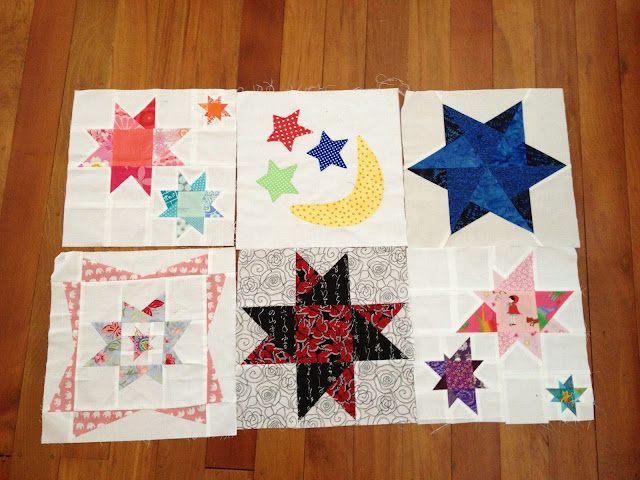 Once upon a time, there was a girl who took part in a bee. It was a wonderful bee and all the participants started out with energy and good intentions. Unfortunately, some of the girls had 'life gettting in the way of sewing' problems, and had to go in the middle of it all. The ones who remained did their best to make extra blocks so nobody was short for their quilts when it was their turn.

This girl had also some "stuff" happening... but didn't want to pull out and disappoint people so was late with blocks... time and again... but... managed to hold out till the end. When it was her turn at the end, there was no time to find a pattern or fabric and she was happy to just leave it and forego her turn.

In came the amazing bee mama Julie, she would have none of it and suggested that if a pattern was set, each bee member could make a block out of stash and their own design. The girl mentioned she would have made a star quilt, had she had her turn and Julie asked everyone to make some stars with cream/white backgrounds. Very soon Julie sent not one, but THREE stars!! An amazing start to the quilt. Cat, also send a star, but it got lost in the post. Having in the end a total of three stars, the girl put them away safely for a future project and decided to forget about the quilt. Who better than she herself knew that when life gets in the way, blocks are late or not made at all! She wasn't upset or unhappy, just one of those things, totally understandable.

As you have guessed, the girl was me! And the bee was the Fresh and Funky bee. Phew... it's harder than you think writing in the third person, and probably a bit boring with it, so good job I am a quilter and not a writer!

I really wasn't unhappy or upset with anyone. After all, it was a lovely bee with a great bunch of people and we certainly had great fun getting to know each other and making all the blocks. I really enjoyed getting to know each and every one of them. I know what it's like when you aren't in a position to send and so totally understand!

But then Cat swung in action! Unbeknown to me, she contacted lots of very kind people. Most of which I didn't even know! and asked them to make some star blocks for me. Can you imagine my surprise when I saw the above photo (and quite a few more) on her blog and realized these stars were for me?

I couldn't stay dry eyed when I read this post which Cat wrote. Cat is such an amazing and compassionate lady... THANK YOU Cat!! For organising all this for me and thank you from the bottom of my heart to all those wonderful quilters who have been making these amazing stars for me!

There are simple ones, complicated ones, big ones, small ones, bright ones, two tone ones and really all you would ever want!

I am SO looking forward to getting my parcel from Cat. It will be a blast putting this quilt together and I will have it forever with me to remind me that, in spite of nasty things in life, I have friends in far places who will help out and look after me in difficult times!

THANK YOU to ALL of you who have sent stars. and also THANK YOU to all who have supported me in the past difficult times and sent emails and prayers and parcels to cheer me up. Bless you all, you are very much appreciated !!!
Posted by Rafael's Mum at 19:53

Your star quilt is going to be very special! A little birdie told me there could well be more than one parcel, so don't get started too soon!

Wow! Amazing quilting community you are a part of!!!

Yay! I'm sooo pleased about your stars. Cat told me a while ago and I had a hard time keeping quiet! You very definitely deserve your stars and as for Cat well, she is just amazing. Juliex

what a wonderful surprise...and i cant think of a more deserving person! hooray for stars!!! cant wait to see what you create! :) hugs~

I am so glad to hear a happy ending to your story! If you want another, send me your address too.

That is going to be a very special quilt indeed.
I cant wait to see it all together xxxx

Will lovingly make you an extra star block Marg,! Send me your deets :) x

Hi, I saw the star Flying Blind made, gosh that girl is good at stars! Mine would be far more basic, but I can make you a star block too is you zap me your address :-)

The universe is full of stars and wonderful people. Can't wait to see how the quilt turns out - it already seems pretty special. :-)