The Glasshouse in the Park

We have a wonderful park nearby and in it is a glasshouse. It is an old Victorian Glasshouse, now council owned and was left to deteriorate for many years. Luckily funding was resolved by effort of Thanet District Council and English Heritage and the glasshouse restored (at a cost of £100.000). I had heard it was to be open at certain times but yesterday was the first time that I personally was there and the gates were open! I had seen it from a distance many times (both before and after restoration) and was really happy to be able to see it first hand at last! 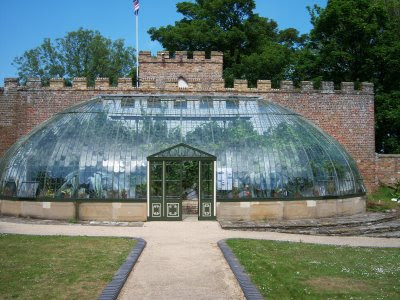 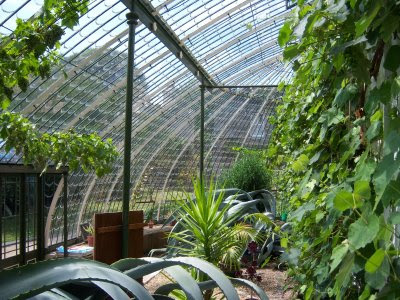 The land that is now the park, was first bought privately in 1794 by a Benjamin Bond Hopkins. It is a very large piece of land with mature trees and big meadows of grass inbetween, bordering on a sheer cliff face (fenced securely... phew... don't fancy my dog surviving that drop!).

The whole plot was walled in with gates at several points and Mr H had a 'beautiful villa in the Gothic taste' (as the history books say) built. "East Cliff Lodge". It was by today's standards a very very large property. It had in its grounds also a gate house, and extensive stable blocks. 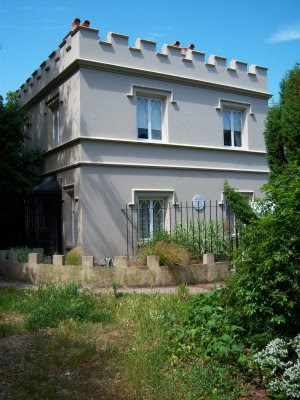 The house changed hands quite a bit, but the most influential family who owned it are the Montefiore family. Sir Moses Montefiore (1784-1885) was an internationally influential Jewish philanthropist and travelled all over the world protecting Jewish interests.He was famous for his generotisty and support of many (also non-Jewish) causes.

It is said that a regular visitor to the Lodge has been Caroline, Princess of Wales, the wife of the future George IV and it is alleged that the greenhouse and planted vines were for her benefit. 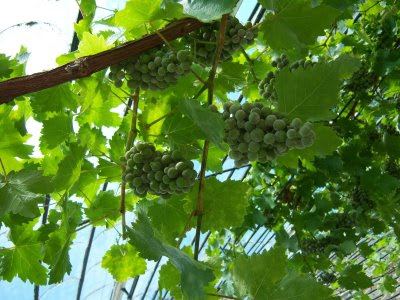 The base of the vine... look how thick, old and well established it is! 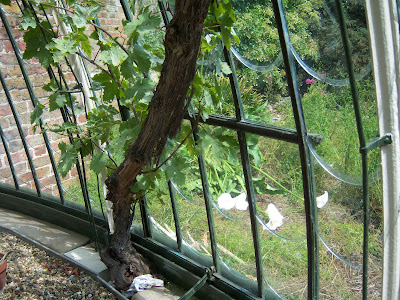 Also, the young princess (later Queen) Victoria was staying nearby with her mother the Duchess of Kent in 1835 and was given special access to the grounds of East Cliff Lodge , in the form of a golden key, made to Sir Moses' orders.

The Montefiore descendants are still connected to the area. Simon Sebag Montefiore, who is a writer/historian opened our new doctors surgery a couple of years ago. He lives with his wife Santa, who is a novelist, and their children in London.

Of the Lodge, the actual main house, nothing remains. It was sadly demolished in 1954. The King George VI Memorial Park was created from its grounds. Thus today we have a beautiful park to enjoy. The grounds are indeed extensive and varied and are enjoyed by many different groups of people (people playing cricket, toddlers in the playground, dog walkers, people walking or spending leisure time picnicing or reading). I come here a lot with Rafael and it is an outstandingly lovely park! 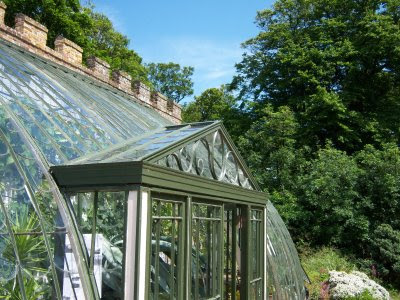 Above, entrance to the greenhouse. 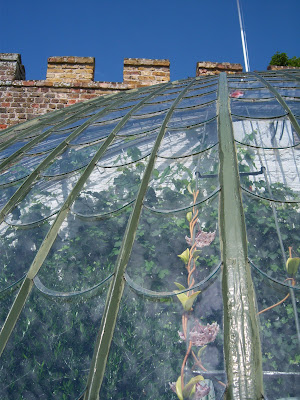 The greenhouse itself has a construction of lovely scalloped glass, much like a fish's scales, overlapping. It is therefore possible to get the lovely rounded shape, rather than the angular glasshouses you would normally see. There is a lot of craftmanship in this and is rather more labour intensive and therefore expensive. Hasn't the man who restored this done a sterling job?

The ventilation of the greenhouse is served by six opening vents at the top; 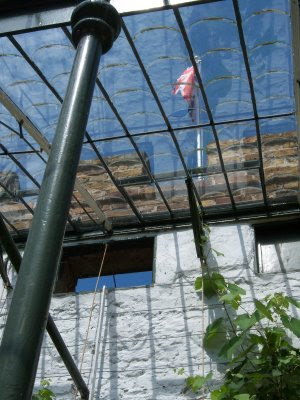 and several vents at the bottom, which open outwards like little windows; 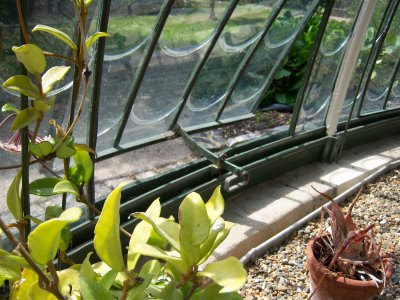 Inside apart from the vines there are two large plants of the Agave species and an olive bush as well as several other (smaller) plants. 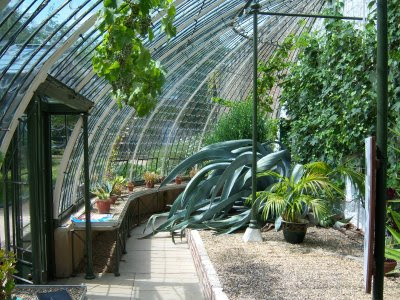 A small formall garden was planted by Sir Moses around the greenhouse, complete with an ornate fountain which he had imported from Italy. This area then became known as 'The Italian Garden' and the green house sometimes as 'The Italiannate Greenhouse' (or Glasshouse). 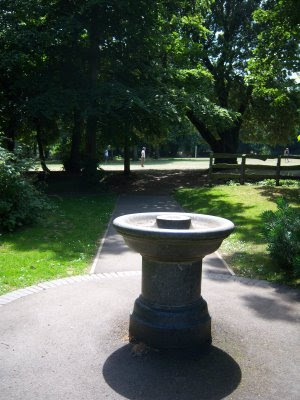 (note the party playing cricket in the park!)

On the base of the fountain, there is a little trough; 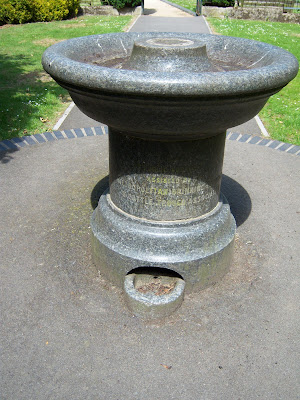 I wonder about this, would there have been cattle grazing around the lodge house? horses needing it maybe ?

Certainly the stables were in the complex close to the gate house and it would have been through these gates; 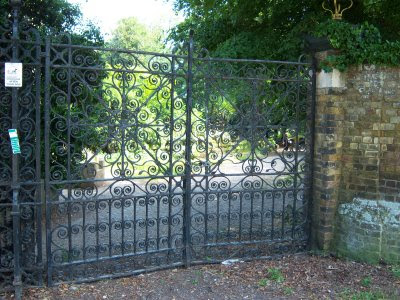 that Sir Moses Montefiore would roll into the park towards the adjacent stables in his carriage (the carriage still exists and can be seen in the Montefiore museum and settlement 'Mishkenot Sha'ananim' (a place of peace) near Jerusalem.

I will leave you with a picture of the vine looking upwards to the roof, just because I like it. 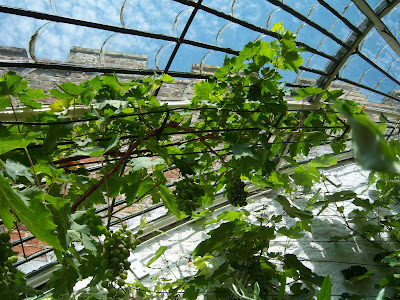 Reference and acknowledgement: Thanks to Thanet Council and English Heritage, from whose information leaflet I have taken the above information and sometimes quoted verbatim. For more information call 00 44 1843 577141 and you are directed to Thanet District Council who can transfer you to the relevant department.
Posted by Rafael's Mum at 08:56

Aren't you lucky to have such a beautiful place, full of interesting History to bring Rafael to!! I love the Glasshouse!! Sorry about your music player...I will miss it! Hopefully you will be able to get the songs you want soon! Damn American Capitalist!! But you know it is all Simon's fault! ;) xo

wow what an amazing place. Thank you for taking us on this little history tour. How special to have such a wonderful place to visit.

Thank you for sharing such wonderful history with us! We, in America, forget sometimes about the rich heritage we descend from!!
laurie

Thanks for sharing that simply stunning glasshouse with us. It's beautifully restored.

Thanks! I am glad you enjoyed reading about it. The whole area is full of history around here. So interesting! I will post snippets here and there inbetween everything else.

What a magnificent structure! I love hearing about the history of buildings and places, especially if they have been visited by royalty. I can only imagine the beautiful wedding photographs taken there over the years.

This is such an amazing place. I used to make stainedglass creations and can tell you curved pieces of glass are really difficult to cut!!! The restoration is fabulous. Very interesting to read about the history.

Beautiful! What a lovely place to visit!