To all of you friends, readers and good people everywhere 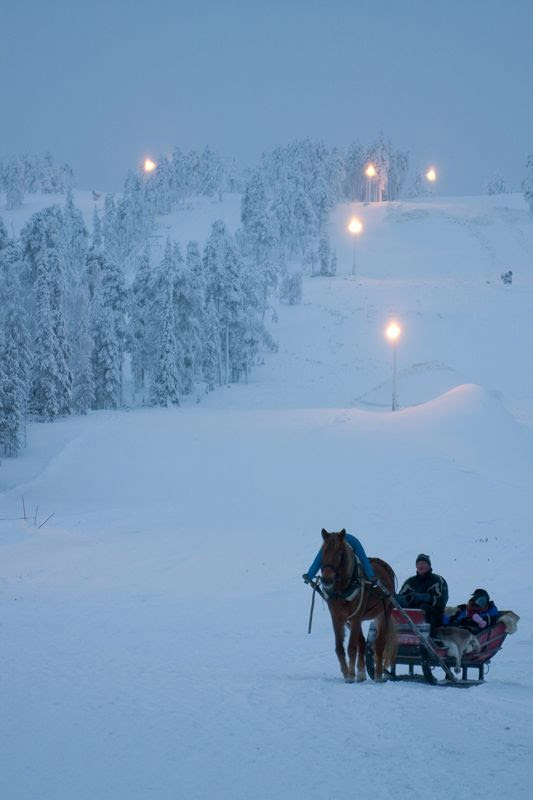 May you have the happiest of festive days!

Kaffe Fassett - a lecture on colour

It's been a while. A quite turbulent while for me too. Dare I just say and mention elderly mother, stroke, nursing home, letting go of all belongings (for her, not me..)and continuing emotional trauma? I am sure many of you can fill in the blanks. In fact, it's been since summer I wrote and you know how it goes, you get out of the habit and put it off... however.... 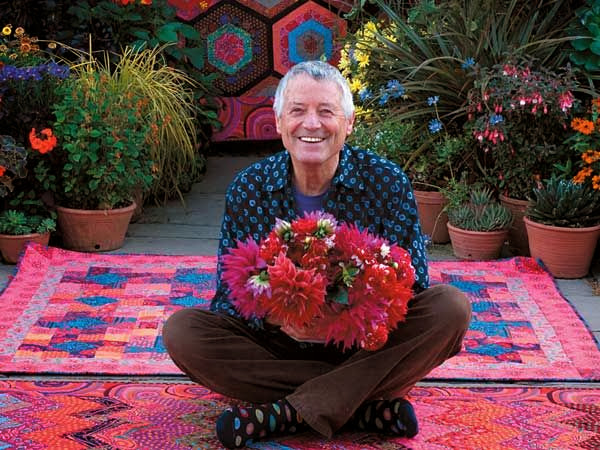 Back with a BANG !! om my gosh... you will never believe this, but I actually and finally (after admiring their designs and life work for SO many years) heard Kaffe Fassett and Brandon Mably speak and met them. It was a glorious evening! And so really interesting and insightfull that I wanted to share it with you all. I won't be able to tell you all, but I will do my best to give you a flavour and some highlights.

Brandon gave us wonderful introduction to Kaffe, his work and the collective. He had us all chanting out his name in the right way. Its 'Kaef' as in "wave" and 'Fassett' as in "asset". So what is our most valuable asset?  Yes, that's correct...  Kaffe Fassett !!

Kaffe then eloquently enticed us into the world of colour, design and pattern. He mentioned that pattern is the way to organise colour in a juicy sexy way. He organises all his yarn in beautiful old chests of drawers by colour, not by weight. He showed us numerous slides of breathtaking landscapes and colours and gave us several examples on where the inspiration had come from for several of his knitwear patterns and quilts. He loves primitive repetitive forms that are done with such humanity, it cannot fail to move you.

He then went on to talk a bit about patterns and colours and where he finds them (all around him, is the answer to that one). The pattern on Kaffe's socks in the picture above, was inspired by a display of circles of eyeshadow in a supermarket whislt he was hanging around waiting for the shopping to be done.

A similar picture to the one below he took of lovely lupins at the Chelsea Flower Show, brought him to the idea of gradation of colour in his knitwear.  He coupled the idea to the colours of a beautiful photograph he took himself (and I therefore cannot show you) of a landscape with trees and stone walls in the early morning mist. Some of the trees were a breathtaking silvery/old rose colour and coupled with the mist it was amazing. I have searched online for an image of the knitwear but haven't been able to find it. He then mixed the colours of the photograph, with the gradation idea of the lupins, and the result was a beautiful knitwear pattern with waves and undulating colour patterns inbetween. 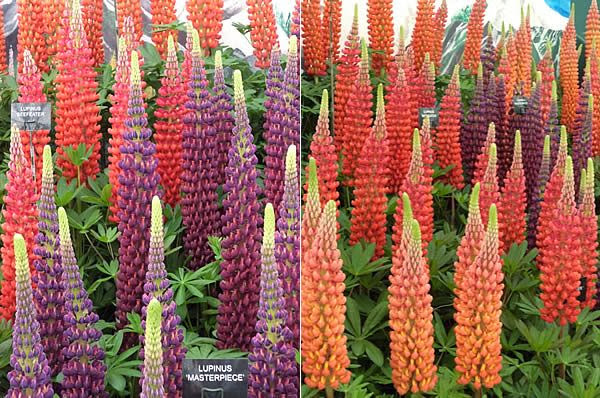 Curiously enough, when Kaffe started out designing, he was into beiges, cremes and greys and taupes in a big way.  He just wouldn't use colour. Think seaside, think shells, soft sand, 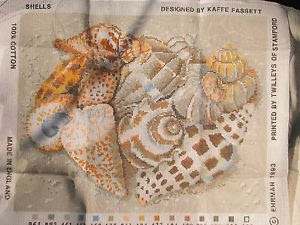 and it was only much later he started using colours in the way he does now although he still loves the softer colours as well.

A few interesting questions from the public came up.

Is creating something you can learn?

Kaffe answered that creativity and design is something we have all inside us.  He said 'have you ever seen a child's picture that is boring?  They are full of colour and imagination and creativity.  It is only later when we grow up that we set ourselves restrictions and tell ourselves that now we are all grown up, we cannot do this and that and the other.  NO!  release that inner child, let your creativity flow and rediscover this inate ability to create we all have, do not be afraid to do it 'wrong'.  There is no wrong, just let yourself go and do it!


How does Kaffe design?

Kaffe told us that designing and the creative process is something that needs concentration.  How can you be creative if every five minutes the phone rings or the doorbell or someone comes in who wants you to make a cup of tea...  When Kaffe designs, he just does that, no interruptions (he is lucky he can employ people to take the phone, answer the door and make the tea, I am just wishing :-).  He says he is very disciplined and it is hard work. He starts at 8am and then he works through, without interruptions and works all day.  He showed us a photo of a paisley design whilst it was a work in progress.  When finished, it looked a bit like this one; 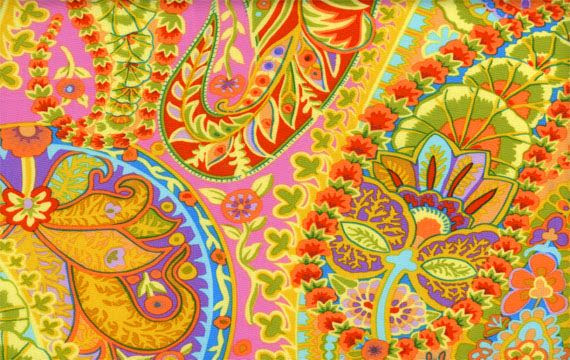 To start with Kaffe surrounds himself with books and photographs and other images for inspiration.  Then he takes elements from everywhere a little detail. In this particular design, he draws the bare paisly form in pencil first.  Then looks for suitable forms to fill in the voids. E.g. the flowers inside the paisley and the outline, come from real flowers. The waterlily pads came into his mind because he went to an exhibition and an artist had made a large figure of a naked man, and had painted these waterlily leaves all over. Once the design is pencil drawn, the long process of handpainting the colours in begins.

The initial pencil design is kept and copied again and in exactly the same way the various colourways are created.  I think you may all know about the Kaffe Collective, where Kaffe, Brandon and Philip Jacobs (another amazing designer) collaborate. I found it very interesting that Kaffe mentioned that they collaborate in the true sense of the word. Like one day Philip comes in with a drawing of Cabbages and Kaffe colours them in a vibrant blue colourway.  I have always thought that each design was entirely done by the designer themselves but it's wonderful that they can all complement and inspire each other. 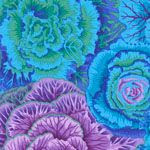 The results are certainly breathtaking! But to come back to the short answer on how Kaffe designs.  He works hard at it !!

Kaffe also said that he finds the creations of his students inspiring. Often they will do things in a different way, which, in turn, will inspire Kaffe to a new beautiful creation of his own!

He reminded us that the world is full of pattern and colour, especially the Middle East, it is just up to us to notice and not rush by with a blind eye.

Thank you very much Kaffe and Brandon for talking to me afterwards, having a look at photos of my quilts and giving me some advice. Also for the obligatory picture... you are both stars ! 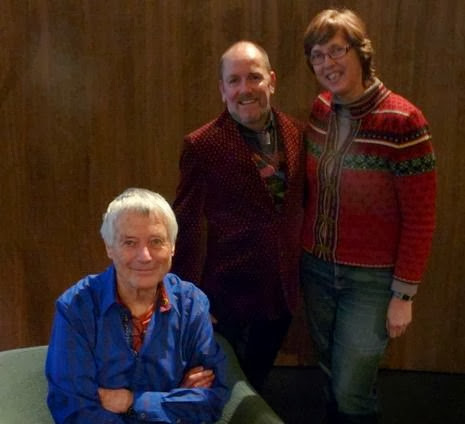 (ps... just LOVED Brandon's velvet jacket.. I felt very underdressed... but it was cold and pouring with rain..I chose comfy and warm. Now I want a velvet jacket... sigh...
Posted by Rafael's Mum at 14:01 8 comments: