When you start getting emails saying are you ok... you know you haven't posted for a while! Thanks everyone who wrote, I am doing ok. This last week been quite tired so literally nothing got done, including sewing...

But I am feeling a bit more perky now and definitely on the up. I know I have been saying that a lot lately and I AM a little better every day, but I was trying to reason myself in being better and the truth is that it is going well but I have to be patient. However I went for short outings both yesterday and the day before which was lovely after a month indoors!!

This is what greeted me this morning when I looked out of the window; 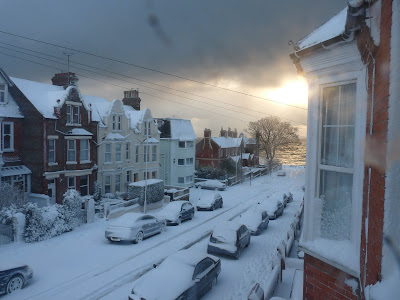 looked in the backgarden; 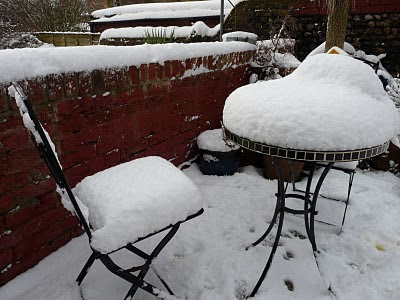 and opened the front door... 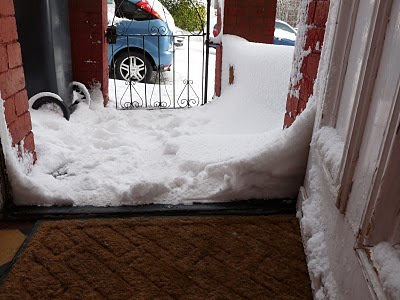 The snow started yesterday with some snowshowers on and off, here one going off over the sea; 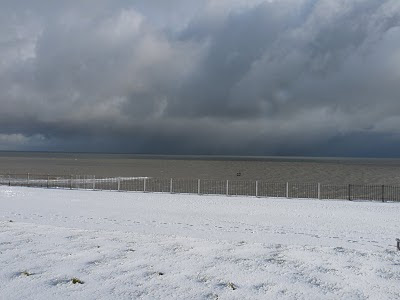 some were very heavy; 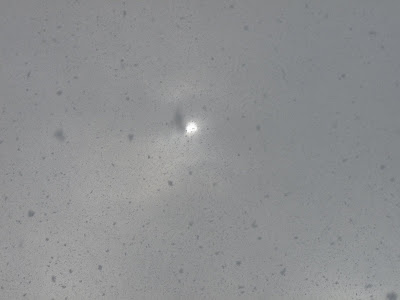 and some a bit lighter and fun to walk through; 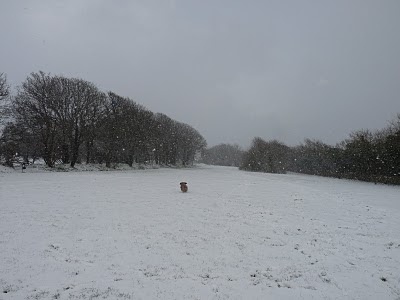 Rafael certainly had fun in the park.. 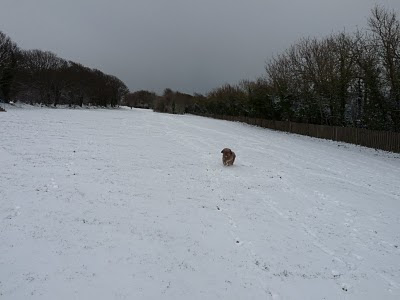 even though the ball was somewhat hard to find because as soon as it hit the ground it started gathering snow and turning itself into a mini snowman.. 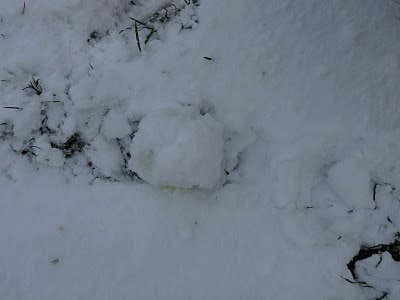 same happened to poor Rafa's paws... The snow clumped and gathered on his paws until it got too heavy to walk with and we had to make regular stops to break up the little snowballs he involuntarily gathered! 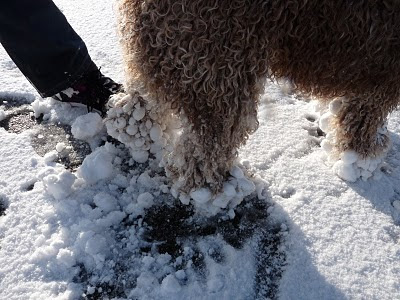 He really enjoys snow though and didn't mind the cold at all...we had to literally drag him back home he was having so much fun!

As for sewing... not started yet but definitely well enough to be up and doing things. I have started a design for DQS8 and have an idea. Also starting the bees blocks soon so things are on the up! Watch this space!!
Posted by Rafael's Mum at 09:44

How beautiful! Snow is so pretty when it's all fresh and new. Glad you got some nice pics and that Rafael had a ball playing in it. Keep up the recovery and enjoy the sewing again.

Hey girlie....great pictures....isn't snow beautiful...leaves everything looking so fresh and clean...until it starts melting and gets dirty at the roads edges!;)

That is such a cute shot of your backyard....and of course I am so seriously jealous of how close you live to the sea!;)

You pup is sooooo cute...I had snowballs like that stuck up inside of my snowpants and dragged them in the house...oh well...it's only water!:)

well honey...i have to tell ya. i have about had it with snow. i know it is pretty to watch but i have not seen the sun for two weeks! arrggghhhh...make it stop!!!!!
i hope you have recovered from your day out.

that pic over the ocean is so beautiful.

I'm glad to hear you're steadily improving! Keep it up! That snow looks amazing, but I have to admit that I hate the stuff. I'm so happy we've had a mild winter this year (sorry Seattle - I hope I didn't just jinx us!).

We actually had some icy rain today, and some parts of Louisiana are under a winter warning with schools being closed tomorrow!! And last week it was in the 70s!!! Oh my aching sinuses!! :D So glad you are getting out and about and bringing us along with your lovely pictures!! Take care, you!! xo

Beautiful snow pictures! There's certainly a lot of it. Looks pretty to me because we don't get snow at all. Good to see Rafael have a ball in it.

No snow in Edinburgh! Thank goodness...
I'm sure you'll be back to your old self soon - it's bound to be up and down for a while, and winter's a good time to be forced to lie around for a bit.
xx

Oh, poor Rafael! The picture of his paws gave me quite a chuckle as did the one of the snow at your front door!

So glad you are on the mend and feeling better everyday!

great snowy shots. so glad to hear you are getting on. :)

Love your snow pictures. Its actually been very hot and humid here in Australia. My son is currently up in Yorkshire, so I''m getting some good pictures from him too. Would swap heat for snow any day. Glad to hear you are recovering. Take it easy.
Kathryn

Good to read that you are doing better and starting to sew again.

It looks like Rafael was having a blast in the snow. Our schnauzers love it too, and come in looking like that. We usually have to use a blow dryer to melt the snowballs attached to their hair!

Hi! I've not been by in a while, and I'm sorry to hear about your recent surgery!!!
But I'm glad that you're feeling better, and best wishes feeling better every day!

What a lovely snow scene to wake up to, and with the sea right at the end of the street. I love how the perfectly cut hedge is collecting snow on top. Rafael looks like he's having fun.

i could sit and look at the picture of the townhomes with the snow and the ocean in the background.........all. day. long. How beautiful. i'm sure I could appreciate our snow a bit more if I had the ocean around the corner.